I recently wrote a final paper on the history of written numerals. In the process, I discovered this fascinating tidbit that didn’t really fit in my paper, but I wanted to put it somewhere. So I’m writing about it here.

If I were to ask you to count as high as you could on your fingers you’d probably get up to 10 before running out of fingers. You can’t count any higher than the number of fingers you have, right? The Romans could! They used a place-value system, combined with various gestures to count all the way up to 9,999 on two hands. 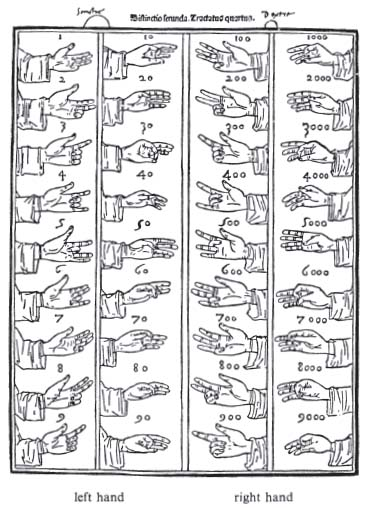 (Note that in this diagram 60 is, in fact, wrong, and this picture swaps the hundreds and the thousands.)

We’ll start with the units. The last three fingers of the left hand, middle, ring, and pinkie, are used to form them.

Zero is formed with an open hand, the opposite of the finger counting we’re used to.

The hundreds and thousands use the same positions on the right hand, with the units being the thousands and the tens being the hundreds. One account, from which the picture above comes, swaps these two, but the first account we have uses this ordering.

Combining all these symbols, you can count all the way to 9,999 yourself on just two hands. Try it!

The first written record of this system comes from the Venerable Bede, an English Benedictine monk who died in 735.

He wrote De computo vel loquela digitorum, “On Calculating and Speaking with the Fingers,” as the introduction to a larger work on chronology, De temporum ratione. (The primary calculation done by monks at the time was calculating the date of Easter, the first Sunday after the first full moon of spring).

He also includes numbers from 10,000 to 1,000,000, but its unknown if these were inventions of the author and were likely rarely used regardless. They require moving your hands to various positions on your body, as illustrated below, from Jacob Leupold’s Theatrum Arilhmetico-Geometricum, published in 1727: 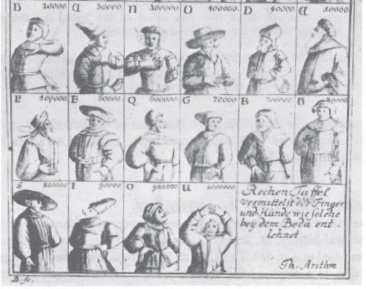 If Bede was the first to write it, how do we know that it came from Roman times? It’s referenced in many Roman writings, including this bit from the Roman satirist Juvenal who died in 130:

Happy is he who so many times over the years has cheated death And now reckons his age on the right hand.

Because of course the right hand is where one counts hundreds!

Now you shall believe what you would deny could be done: In your hands you hold eight, as my teacher once taught; Take away seven, and six still remain.